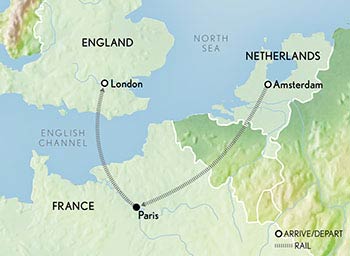 In between cruising each city's waterways, visit the Anne Frank House in Amsterdam, discover Montmartre and the Louvre in Paris and, in London, see Buckingham Palace and historic Windsor Castle.

Arrive in Amsterdam, where you are met and transferred to your art-gallery inspired hotel. The balance of the day is at leisure. This evening, join your Resident Tour Director and fellow guests for an unforgettable welcome meal, dining at a historic restaurant that sheltered Jews during World War II.

Embark on a walking tour of this beautiful city, visiting the house in which Anne Frank wrote her celebrated diary. Then cruise through Amsterdam's legendary canals, which are lined with tilted "dancing houses," colorful houseboats and the remains of ancient defensive walls. Spanning 62 miles, the city's canals also encompass some 90 islands and more than 1,200 bridges. Enjoy a lunch at a local restaurant followed by an afternoon at leisure to explore on your own.

Begin with a private visit to Douwes Fine Art, a gallery offering a firsthand look at art restoration. Come away with a deeper understanding of the process before visiting the Rijksmuseum, where you may feast your eyes on Dutch masterpieces by Rembrandt and Vermeer. This afternoon, go by high-speed train to Paris, the "City of Light."

Start the day with a Market Connection, embarking on a guidedfood walk through the city, and exploring the local marketsthat exude the real vibrancy and romance of Parisian life. Later,explore the city from the seat of a vintage Citroën 2CV car,viewing the Eiffel Tower, Arc de Triomphe, Champs-Élysées andNotre Dame Cathedral. With time at leisure, stroll through theTuileries Gardens.

Day 6: PARIS / The Colors of Montmartre

This morning, discover the charms of the storied Montmartre District, a hotbed of creativity since the 19th century. Walk its winding back streets and join a local artist who teaches you how to sketch. Later, board the Eurostar to London, and settle into your boutique hotel before dinner in a traditional English pub.

This morning, take advantage of exclusive before-hours entry to the Cabinet War Rooms, nerve center of Winston Churchill's defense of Britain during World War II. Then set off on a panoramic tour that includes Buckingham Palace, the elegant Tower Bridge and St. Paul's Cathedral, before visiting the storied Tower of London. After lunch, cruise to the London Eye for a spectacular bird's-eye view of the city.

Visit historic Windsor Castle, the largest occupied castle in the world and also one of the Queen's principal residences. Rebuilt and remodeled by successive monarchs since 1080, it is a vision of true royalty with towers and battlements, lavish chambers and state apartments, an elegant chapel, and even an extraordinary dollhouse. Explore the city at leisure this afternoon before gathering tonight for a celebratory farewell dinner.

After breakfast, transfer to the airport and depart.